Get fresh music recommendations delivered to your inbox every Friday.
We've updated our Terms of Use. You can review the changes here.

the disagreeable subject of Var​è​se's father 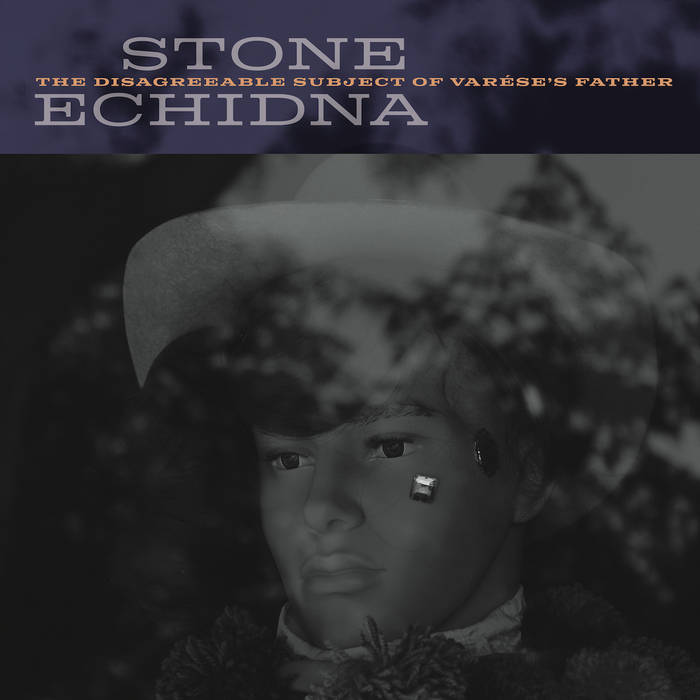 The two of them…., brass and not so taut strings,
put their thinking caps together and brought up a universe of bakelite utensils,
‘olde world’ but ecstatic/electric.
With these cast machines, twisted together, they channeled a windy message for all able to listen. That message is:
The tin breathes, the wood sighs and no father is beyond reproach.

Stone Echidna is a duo project comprised of guitarist David Brown (aka candlesnuffer) and trumpeter Reuben Lewis (aka I Hold the Lion’s Paw). Steeped in introspection and deep focus, Stone Echidna invites the listener to embrace the unfamiliar and immerse themselves in a dramatic and strangely beautiful musical landscape.

Their debut album ‘the disagreeable subject of Varèse's father’ is born out of an organic cross-over of conventional electro-acoustic methods, noisy interjections and a refined vocabulary of tiny acoustic sounds enlarged outside their normal context. Expect to hear slowly evolving soundtracks, grinding tectonic plates of vibration and auditory developments akin to dual satellites in patient orbit.

The duo sprung from an initial fascination with the pairing of fully prepared guitar and the breathiness extended techniques elicited from acoustic trumpet. From the group's birth, and at odds with their staple acoustic sounds, Brown and Lewis utilised minimal electronics through small amplifiers to provide an extra pair of accompanying textural outputs. Then, across a somewhat short duration, the electronic component of the group sound grew exponentially to equal and rival the acoustic elements, while in addition, a semi-acoustic, tenor guitar was added to the sonic vocabulary, allowing the guitar preparations to play a more secondary role.

‘the disagreeable subject of Varèse’s father’ is released to correlate loosely with the publication in October 2020, by Bloomsbury Press, of the academic edition; ‘The Aesthetics of Imperfection in Music and the Arts; Spontaneity, Flaws and the Unfinished’, a collection of essays and interviews centred round the notion of the accidental in creativity edited by Andy Hamilton and Lara Pearson.

Both members of Stone Echidna have made contributions to the publication, firstly on Brown’s behalf in the form of an essay that explains the slow gestation of his improvisatory and extended instrumental techniques, and secondly through an open interview conducted by Lewis with Brown that elucidates the processes and historical background of the recording of ‘the disagreeable subject of Varèse’s father’ and more.

Appreciation for ‘the disagreeable subject of Varèse’s father’ by Des Cowley:

More than twenty years back, I used to visit Mark Harwood’s hole-in-the-wall record store Synaesthesia, then located upstairs in a building in Maples Lane, Prahran. He stocked hard-to-get recordings: free jazz labels like FMP, Hat Hut, Winter & Winter, Emanem. Invariably I would stumble upon obscure European releases by Peter Brotzmann, Evan Parker, Cecil Taylor, Steve Lacy and others. Guitarist David Brown was a regular visitor to the store, and I remember coming across him there, always in earnest conversation with Harwood, which is not surprising, given Brown’s work with Bucketrider at the time. The music Harwood played in the shop often sounded like some sort of white noise, an ambient transmission made up of a series of electrical bleeps and chirrups, much of it on the fringe of my then definition of music, let alone jazz. There are worlds within worlds. Entering Harwood’s shop sometimes felt like stumbling upon a hitherto unknown musical continent, which was part of its attraction.

The music of Stone Echidna, with its timbral passages, its emphasis on light and dark shadings, on silence and electro-acoustic impulses, would have been right at home playing in Synaesthesia. ‘the disagreeable subject of Varèse’s father’ provides the first recorded documentation of the improvising duo of guitarist David Brown and trumpeter Reuben Lewis. They first met at the 2014 SoundOut Festival in Canberra, where both were scheduled to play, and later began performing occasional duo gigs. More recently, Brown has been a member of Lewis’s psychedelic collective I Hold the Lion’s Paw, appearing on the ensemble’s debut recording Abstract Playgrounds.

The title of Stone Echidna’s album feels like it might have come right out of a Dada performance at Cabaret Voltaire, or an Alfred Jarry play. In keeping with that anarchic spirit, Varèse’s Father is an entirely improvised affair. Nothing planned, nothing fixed, just two musicians assembling in a studio, surrounded by an assortment of instrumentation: prepared guitars, pedals, loops, processors, contact microphones, trumpet, amplifiers, objects. It is familiar terrain to both musicians. Here, however, we can sense a heightened intimacy, born of whispered conversation and mutuality. From the opening moments, we intuit the gentle forays these musicians are making, as they embrace uncertainty and abstraction.

The opener ‘lifting the top off folksinging’, an uninterrupted seventeen-minute improvisation, is the album’s tour de force. There are no hooks, or rhythmic interludes, nothing whatsoever proffered by way of a life raft for untrained ears. The piece is crafted as a study in contrasting textures, an investigation into the duality of silence/sound. For its opening minutes, it barely rises above a murmur, but ever-so-slowly its isolated components – acoustic guitar, electronic bleeps, trumpet, effects – coalesce and meld. David Brown bends and twists notes into arrhythmic, jerky configurations, while Reuben Lewis’s trumpet serves up dark and brooding, almost glacial, sounds. As it progresses, spasmodic noises and electronic effects are added, fashioning an incremental layering of ambient textures, to the extent where it becomes impossible to determine who is making what sound. For its duration, this tonal world is examined in infinitesimal detail, as if an object were being gazed upon simultaneously from all sides.

Steeped in introspection and deep focus, Stone Echidna has fashioned a musical landscape that demands patience and effort from the listener, asking that we leave our musical baggage at the door, and embrace the unfamiliar. Only with repeated listening does the drama and beauty inherent within this music fully reveal itself.

The remainder of the pieces on the album are shorter in duration, resembling laboratory experiments. Several are the result of single takes; others are offcuts from larger improvisations, resembling left-over blocks from which future architectural edifices might be made. Either that or small spontaneous miniatures polished to perfection. These pieces come across as brief tone poems that never outstay their welcome.

Varèse’s Father evokes its own distinct sound world, constructed as real-time aural collages. Brown and Lewis translate isolated sounds into variable patterns, bridging momentum and stasis, tonal reverberation and silence. The end result is a series of sound sculptures, minimal and ambient, hewn out of stone and living matter. Its quiet intensity spills forth, as elemental as breathing.

When I broach Stone Echidna’s influences, Reuben Lewis reels off a series of names unfamiliar to me: Streifenjunko, Eivind Lønning. There are worlds. But, to my mind, this music will reverberate with anyone who has kept an eye on experimental music over the past half century or more: whether it be Roscoe Mitchell’s Sound, the early BYG recordings of Anthony Braxton and Wadada Leo Smith, the extended improvisations of guitarist Derek Bailey, Karlheinz Stockhausen’s Kontakte, or the music of John Cage.

Who was Varèse’s father? He appears historically to be a somewhat absent figure. But let’s conjure up an image of Edgard Varèse instead: wild hair, intense gaze, slightly unhinged. He described his music as sound-masses. In looking to the father, Stone Echidna have embraced the son, responding to the very question he once posed: ‘What is music but organised noise?’

‘The Aesthetics of Imperfection in Music and the Arts; Spontaneity, Flaws and the Unfinished’ can be found at
www.bloomsbury.com/us/the-aesthetics-of-imperfection-in-music-and-the-arts-9781350106079/

The artists extend their respects and acknowledge that this music was made on the unceded lands of the Wurundjeri Woi-wurrng peoples of the Kulin Nation.

ARIA nominated trumpeter, composer, improviser and producer specialising in cross-genre, cross-cultural and multidisciplinary collaboration. With a sound that is both singular and eclectic, he is widely acclaimed for his artistic vision and ability to bring people together. ... more